Sir Christopher Frank Carandini Lee (May 27, 1922 - June 7, 2015) was an English actor, author and singer. Lee played Count Dracula in many different films, most notably the long running Hammer Dracula series. Lee also appeared as Dracula in the 1970 Spanish/German adaptation and the 1972 French comedy, Dracula and Son.

Lee has played Dracula mores times in film than any other actor.

He was the most prolific character actor in history, having appeared in more than 270 motion pictures between 1947 and 2014. With a few exceptions, Lee was typecast as a villain due to his Dracula role. 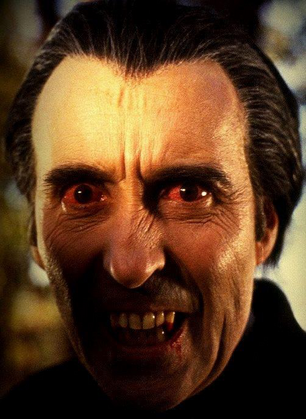 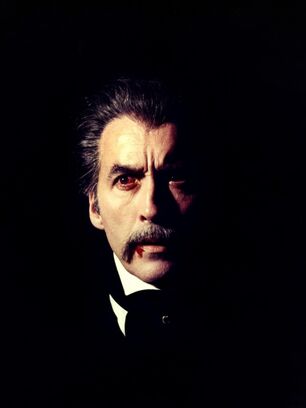 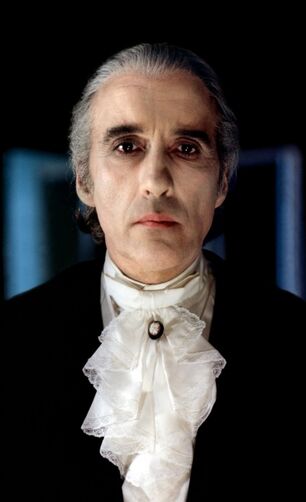 1974 French parody
Add a photo to this gallery

Films in which Lee appears as DraculaEdit

Lee appeared in the 1959 Italian comedy Uncle Was a Vampire as a vampire. He also cameoed in the 1969 British comedy The Magic Christian as the "ship's vampire."

He was best friend to actor Peter Cushing who played Van Helsing in the Hammer films. He has often collaborated with Tim Burton & Johnny Depp in his older years, both are fans of his work with Hammer.

Lee's operatic singing voce and popularity in the horror genre has also made him an icon among the Goth & metal community. Lee recorded a metal album in 2011-2012 at age 90. His last film role was in 2015 in: "Angels in Nothing Hill" - which was sadly uncompleted.

Besides Count Dracula, Lee is well-recognized for his role as Bond-villain Francisco Scaramanga in The Man with the Golden Gun and Fu Manchu in five films during his Dracula era. Lee continues to receive critical acclaim for his performance as Lord Summerisle in The Wicker Man. During the 80's and 90's he appeared in films like Howling II: Your Sister Is a Werewolf and Gremlins 2: The New Batch.

In later years Lee reemerged in the mainstream thanks to his 1999 cameo in Tim Burton's Sleepy Hollow. This led to major roles like Saruman the White in Peter Jacksonn's Lord of the Rings trilogy and Darth Tyranus/Count Dooku in Star Wars Episode II: Attack of the Clones and Episode III: Revenge of the Sith.

Sir Christopher Lee passed away at Chalsea and Westminster Hospital on Sunday June 7, 2015 at the age of 93. He had been treated for heart failure and breathing problems. He passed away in the presence of his family and his wife Brigit. The news of his passing was made public on June 11, 2015.

Many paid tribute to him on the following days including Tim Burton, Sir Roger Moore and Ian McKellen.