Count Dracula, also simply known as Dracula or Alucard, formerly known as Vlad III "Tepes" Basarab is the titular main antagonist of the 1897 legendary horror novel Dracula by the late author Bram Stoker. He is a centuries-old vampire, sorcerer and Transylvanian nobleman, who rules over his namesake palace known as Castle Dracula and he attempts to expand his realm in England but is thwarted and destroyed by the protagonists.

Though usually portrayed as having a strong Eastern European accent, the original novel only specifies that his spoken English is excellent, though strangely toned.

His appearance is originally described as thin, with a long white moustache set under an aquiline nose, pointed ears and sharp teeth. He is dressed all in black and has hair on his palms. Jonathan Harker described him as an old man; "cruel looking" and giving an effect of "extraordinary pallor".
I saw. Dracula. With red light of triumph in his eyes, and with a smile that Judas in hell might be proud of.

As the novel progresses, Dracula is described as taking on a more and more youthful appearance. However, Jonathan Harker's observation that Dracula is invisible in the mirror suggests that he is essentially incorporeal.

He is described as an expert scholar with immense knowledge in many scientific fields, including alchemy and was stated by Van Helsing to even attempting the obscure field of Scholomance, a form of dark magic from the Carpathain Mountains taught by the devil himself.

Count Dracula was born on September 13, 1431 In Transylvania

during his youth he was made into a vampire by the damnation of God.

Dead and buried in a great tomb in the chapel of his castle, Dracula returns from death as a vampire and lives for several centuries in his castle with three beautiful female vampires, who lay similarly entombed in the chapel beside him. His relations with these so-called "Brides of Dracula" are intimate, and two of them seem to bear a possible family resemblance though whether they be his lovers, sisters, daughters or an incestuous combination of these, as some have conjectured, is not made clear in the narrative.

As the novel begins in the late 19th century, Dracula acts on a long contemplated plan for world domination, and infiltrates London to begin his reign of terror. He summons Jonathan Harker, a newly qualified English solicitor, to provide legal support for a real estate transaction overseen by Harker's employer. Dracula at first charms Harker with his cordiality and historical knowledge and even rescues him from the clutches of his three bloodthirsty brides. In truth, however, Dracula wishes to keep Harker alive just long enough for his legal transaction to finish and to learn as much as possible about England.

Dracula leaves his castle and boards a Russian ship, the Demeter, taking along with him boxes of Transylvanian soil, which he needs in order to regain his strength. During the voyage to Whitby, a coastal town in northern England, he sustains himself on the ship's crew members. Only one body is later found, that of the captain, who is found tied up to the ship's helm. The captain's log is recovered and tells of strange events that had taken place during the ship's journey. Dracula leaves the ship in the form of a wolf.

Soon Dracula is menacing Harker's devoted fiancée, Mina Murray, and her vivacious friend, Lucy Westenra. There is also a notable link between Dracula and R.M. Renfield, a patient in an insane asylum compelled to consume insects, spiders, birds, and other creatures - in ascending order of size - in order to absorb their "life force". Renfield acts as a kind of sensor, reacting to Dracula's proximity and supplying clues accordingly. Dracula begins to visit Lucy's bed chamber on a nightly basis, draining her of blood while simultaneously infecting her with the curse of vampirism. Not knowing the cause for Lucy's deterioration, her companions call upon the Dutch doctor Van Helsing, the former mentor of one of Lucy's suitors. Van Helsing soon deduces her condition's supernatural origins, but does not speak out. Despite an attempt at keeping the vampire at bay with garlic, Dracula entices Lucy out of her chamber late at night and drains her blood, killing her and transforming her into one of the undead.

Van Helsing and a group of men enter Lucy's crypt and kill her reanimated corpse. They later enter Dracula's residence at Carfax, destroying his boxes of earth, depriving Dracula of his ability to rest. Dracula leaves England to return to his homeland, but not before biting Mina.

The final section of the novel details thheroes racing Dracula back to Transylvania, and in a climactic battle with Dracula's gypsy bodyguards, destroying him. Despite the popular image of Dracula having a stake driven through his heart, Mina's narrative describes his throat being sliced through by Jonathan Harker's kukri knife and his heart pierced by Quincey Morris's bowie knife[1]

Dracula as an old man 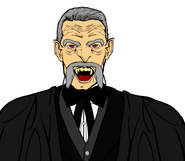