This article is about the novel by Bram Stoker. For the character from the novel, see Count Dracula. 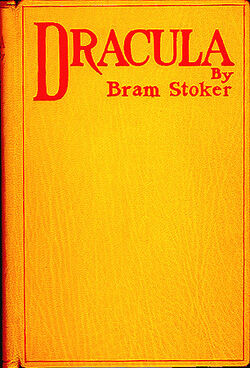 Dracula is a Victorian gothic novel by Irish author Bram Stoker first published on May 26, 1897. It is one of the most famous novels of modern times, mostly due to the amount of movie adaptations it has inspired. It has become cultural attachment. It is written in epistolary format, told through diary entries.

The novel begins with the English solicitor Jonathan Harker travelling the picturesque south eastern European countryside at the behest of his employer to meet with a client, Dracula, who resides in an old, weathered and ruined castle, tucked deep in the Carpathian Mountains, on the border of Transylvania, Bukovina and Moldavia. Dracula, who wishes to purchase property in England insists that Harker remains with him in Transylvania for a short periode of time, as to educate Dracula in the ways of English society. Harker and Dracula would spend entire nights engaged in discussion or engrossed in English literature and periodicals or the maps of it's great cities. Each time this happened though, just before the dawn, the Dracula would halt everything and excuse himself, to attend to other business, leaving Harker alone in the empty castle, sometimes for days. After weeks of enduring this peculiar behaviour and witnessing first-hand many impossible and baffling phenomena, Harker comes to realise he is not a welcomed guest in Dracula's home but His prisoner. Worse yet, Harker discovers that his tormentor isn't quite the man he seems to be, but is a vampire: a dark creature of great evil who must feed upon the blood of the living.

Back in England, at the costal town of Whitby (the town in which Dracula first set foot on English soil), miss Lucy Westenra, dearest friend to Jonathan Harker's fiancée Mina Murray, falls deathly ill, exhibiting signs of severe anemia and dementia. Mina, now uncertain of her fiancé's whereabouts and concerned with his welfare, must also cope with the slow, painful and misunderstood decline in her closest friends health. Miss Murray does not face these situations alone however, a small group of trusted and beloved friends lead by Dr. Abraham Van Helsing seek to destroy Dracula who has travelled to London, to end his reign of terror forever. They must protect Harker's fiancée Mina from Dracula's influence, while mental patient Renfield, seems to have a connection with him.

The novel has been adapted many times through the years, from plays and films to comic books and video games.

Dracula has become the most famous horror character in history. The novel is arranged in epistolary format, being told through diaries, letters and telegrams, among other formats as well.

The novel and its characters have entered the public domain.

The English solicitor Jonathan Harker travels to Transylvania in Hungary. He goes there on account of his superior Mr. Peter Hawkins to assist with the paperwork attached to the purchase  - a mysterious foreign noble by the name of Dracula who lives in a castle near the Borgo-Pass and has bought the property known as Carfax in London's Purfleet suburb. He receives a letter from the count in the train on the border from Moldovia to Bukovina. Locals seem to be frightened of the castle and tell him that "the dead travel fast". He is given a crucifix by a local woman, and from politeness Harker accepts though he does not believe the superstition.

That night, the count's carriage awaits him at the Borgo Pass. The coachman is strong and seems peculiar. When they are surrounded by wolves the coachman sends them away by a simple gesture. At Castle Dracula, Jonathan is greeted by Dracula, a pale old man with a grey moustache, a high-bridged nose with fibrant red lips and dressed all in black greets him politely. Dracula does not dine and the next few days is nowhere to be seen during the day. Harker notices his host has hair growing on his palms and sharp protruding canine-teeth.

Dracula and Harker spend long nights talking only for the count to vanish at dawn. In the following days, Harker begins to feel uneasy. One evening, when Harker shaves he is startled by Dracula, whose likeness is not reflected in the mirror. From shock, Harker cuts his neck and Dracula reacts strangely to the blood. When Harker turns, Dracula sees the crucifix and is driven back. Furious, Dracula takes the mirror and drops it from the window breaking it on the pavement. [Work Not finished]