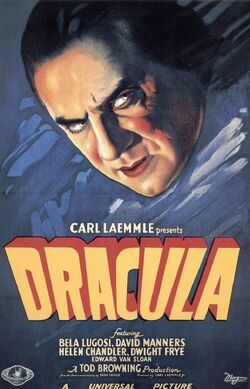 Dracula is a 1931 Universal horror film directed by Tod Browning and written by Carl Leammle Jr. It was the first in the cycle of Universal Studios classic monsters. It was based on the 1924 stageplay by Hamilton Deane and the novel Dracula by Bram Stoker. The movie starred: Bela Lugosi, Edward Van Sloan, Helen Chandler, Dwight Frye and Francis Dade.

English solicitor Renfield travels to Transylvania to the mysterious client Count Dracula who has bought a house in London. The locals seem to be scared of the castle. Arriving, Dracula welcomes Renfield. It turns out he is a vampire. Dracula hypnotizes Renfield and travels with him - driven insane - to England.

There, Lucy Weston a lovely girl in London falls victim to the bloodlust of Dracula. Mina Harker and her fiancé John Harker - close friends to Lucy - call in the help of the specialist professor Abraham Van Helsing to find and destroy the Count. But what does the vampire plan to do with Mina?

"Dracula" first was a classic stage play from 1924. Universal Pictures adapted it in the first official adaptation of Bram Stoker's novel. Tod Browning directed it while it was written by Carl Leammle Jr. The movie had no music once however, seeing how it was the first sound horror film. The only piece of music was Swan Lake during the opening. It straighted far from the book. Dracula began the cycle of Universal Monsters which continued in the 1930's till the late 1940's.

"Dracula" is regarded as a classic. It is said to be the greatest vampire movie ever made and established the character to the American public and the world. In 1958 the story was re-imagined in Hammer's 1958's movie Horror of Dracula. The original film got two sequels: Dracula's Daughter and Son of Dracula. Bela Lugosi would reprise the role in Abbott and Costello Meet Frankenstein in 1948.

Count Dracula often regarded among side the other Universal Studios Monsters. Bela Lugosi's version can be considered the most well known.

In 1979 Universal made another version of Dracula (1979 film) starring Frank Langella.

Dracula was released on VHS in 1991 in the Universal Studios Monsters Classic Collection. Later it got several DVD and Blu-Ray releases. In 2012 a double-sided Blu-Ray was released featuring both the American and Spanish version.