Prince Vlad III, also known as Dracula and Alexander Grayson, is the main protagonist of the tv series, Dracula. He is also the first known vampire to ever exist.

Under the name Alexander Grayson, Vlad arrives in Victorian London in the year 1890 to introduce technology to the society.

In actuality, Vlad is there to seek his revenge on the people who wronged him centuries earlier, members of the organization known as the Order of the Dragon and to destroy the organization itself.

Originally, Vlad Tepes was a prince renowned for his ruthlessness and military strategy. He was also a member of the Order of the Dragon; head Huntsmen of his region and a serving member of the Council. However, in an undiclosed event, he betrayed the order in a way so severe the normal response of the order; execution was seen as less than fitting punishment.

Instead the order employed occult means to transform Vlad into the first vampire so that he might suffer for all eternity. Unfortunately, the Order underestimated Vlad's rage and desire for vengeance, and that being a vampire without a sire made him stronger than the average vampire. He then proceeded to enact a campaign of vengeance against the Order, siring a legion of vampires to his cause. Vlad was eventually given the titles; "Dracula", "Old One", the "Fell One", "Nosferatu", "Primo" and "Master Vampire".

Somehow, the Order managed to imprison Dracula far from the world and all records of the monster were sealed, though his sired progeny remained loose into the world; only the Head Huntsman and Grand Master being able to access them. In the centuries that followed, Dracula became something of a fairy tale among the Order, and to a certain extent, vampires as well. The vampires viewed him as an avenging figure, while the Order believed him a figment created by the vampires to intimidate mortals.

In "The Blood Is the Life", The season kicks off with two unknown men climbing down into the tomb of Vlad Tepes in Romania, and after a quick examination of the ornate coffin, one of the two men breaks it open using a hammer and examines the aged and apparently decaying body of Dracula while the other picks up blocks of gold off the floor and begans to examine it.

The man who breaks open the coffin states how thirsty he must be, referring to the several hundred years that Vlad had been confined and impaled inside of the coffin. While the other man is still entranced by the bars of gold that he found, he moves around the coffin and draws a dagger from his belt, stabbing the man twice and draining his blood onto the coffin and then he hits a button that releases the mechanism which was used to keep Vlad impaled.

Vlad is sophisticated, polite and outwardly charming, but he is also a ruthless and perverse killer who; in the nadir of depravity, makes medical experiments with sentient beings. He is very intelligent, calculating, sneaky and pragmatic, confronting his problems head on and always planning steps ahead to achieve his goal of eliminating the Order of the Dragon. He can actively manipulate people's feelings, directly or indirectly; to achieve his goals, especially when it comes to getting his vengeance or getting forever closer with his love interest, Mina Murray.

However, Vlad avoids the obvious option of simply turning Mina to win her as he believes it would be an abomination to turn her into a vampire, even encouraging her to return to Jonathan Harker as it would make both of them happy (although he acknowledges that keeping her close to Jonathan and hence within his circle, is another reason for his actions) he is also ruthless towards his enemies, however, despite this, he has a sense of honor. Vlad is kind to those he cares for; such as Renfield and Mina respectively.

Vlad's closest friendship is with Renfield; who know his secrets and helps him acquire blood while assisting in his plan to get revenge on the Order of the Dragon.

Vlad has an odd relationship with Abraham, Abraham restores Vlad to life in the first episode. Abraham does this to acquire Vlad's help in order to overthrow the Order of the Dragon; who had previously killed Abraham's wife and children as a punishment.

However, towards the end of the series, the two have a falling out and Abraham turns against Vlad.

Vlad had a sexual relationship with Jayne, a high ranking aristocrat; who also was part of the Order of the Dragon, acting as the head vampire hunter. Although they were lovers, it was unlikely that Vlad had any genuine romantic feelings for her, especially since she was a member of the Order of the Dragon. However, by the end of the series, the two have become aware of each other's true identities and Jayne was killed by Vlad.

Vlad's heart truly lies with Mina; who he meets and recognises instantly as the reincarnation of his wife, Ilona; who was burnt at the stake in front of him by the Order of the Dragon before he was turned into a vampire.

However, despite Vlad's passion for Mina, he refuses to turn her into a vampire like himself, claiming it would be an "abomination" for her to become a monster like himself, Mina herself is likewise instantly taken by Vlad vaguely remembering him from her past life.

However, for most of the first season Mina is engaged to Jonathan Harker, Vlad is also very protective of Mina as seen in "Four Roses", when he saves her from Davenport's men.

In "Let There Be Light", Vlad revealed to Mina that she is the reincarnation of Ilona, his long dead wife. They share their first kiss and also make love.

428 years prior to Vlad's arrival in London; he cherished her deeply as she did him. She was killed by the Order of the Dragon which set Vlad on his path to vengeance. 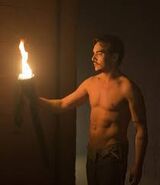 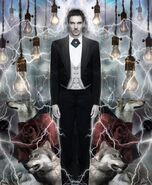