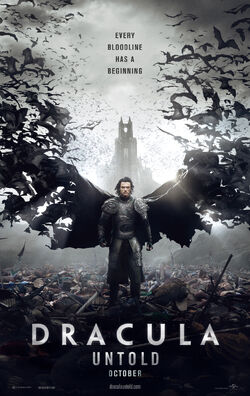 Dracula Untold is an 2014 fantasy/action film based on the character created by Bram Stoker. It is intended as a "reboot" to relaunch the Universal Monsters "cinematic universe".

It appears to have little in common with the actual novel. Instead it seems to be influenced by Dan Curtis' Dracula & Francis Ford Coppola's Dracula, painting him as sympathetic and combing him with the historical figure Vlad III. The difference being that this film focuses solely on his days as a military leader. Despite the existence of several other similar, well known, high profile projects - the minds behind the film claim to be presenting the "untold" backstory to the character.

Luke Evans (Fast & Furious 6, Immortals, The Hobbit) stars in Dracula Untold, the origin story of the man who became Dracula.

In the Middle Ages, Vlad Tepes (Luke Evans) is the Prince of Wallachia and Transylvania. As a child, he was a princely hostage of the Ottoman Empire and was trained to be a soldier in the Sultan's elite Janissary corps, where he became their most feared warrior. He was called Vlad the Impaler after slaughtering thousands by impaling them on spears. Eventually sickened by his acts, he put aside his past and returned to rule his domains in peace. One day in the forest, Vlad and his soldiers discover a helmet in a stream. Fearing that an Ottoman scouting party is preparing the way for invasion, they follow the stream to a high mountain cave called Broken Tooth Mountain. Upon entering the cave, they discover the ground of the cave is carpeted in crushed bone; and they are attacked in the dark by an unknown creature (Charles Dance) with shining red eyes, as well as inhuman speed and strength. While his men are killed, Vlad cuts the creature of the cave with his sword before being thrown to the ground. The blood on the sword he used to cut the creature dissolves when exposed to sunlight, and the creature does not pursue Vlad into the sunlight at the mouth of the cave. Returning to his castle, Vlad learns from a local monk that the creature is a vampire, who was once a man who summoned a demon from the depths of hell and made a pact with it for dark powers before being tricked by the demon and cursed to remain in the cave forever until he is released by someone who drinks his blood, then drinks the blood of a human. The person is welcome to share his power in exchange for the freedom to escape the cave.

The next day, as Vlad celebrates an Easter feast with his wife Mirena (Sarah Gadon), his son Ingeras (Art Parkinson), and his subjects, an Ottoman contingent arrives unexpectedly at the castle. Vlad offers them the usual tribute payment of silver coins, but the emissary notes that a battalion of Ottoman scouts has gone missing, implying that Vlad has had them killed. Vlad professes that he had not killed them. The emissary demands an additional tribute of 1,000 boys to be trained as Janissaries, through thedevşirme system. Vlad refuses, but his army is small and no match for the Turks. Mirena believes that, because of Vlad and Mehmed's (Dominic Cooper) history together as children, being close like brothers, if he were to ask, Mehmed would show him mercy. He approaches Mehmed II and asks him not to take the country's boys. When that fails, he offers himself in place of the boys; but the Sultan refuses and demands Vlad's son in addition. The Sultan sends the emissary to bring Vlad's son. Vlad has an argument with his wife, as he is sending his son to meet the emissary and Ottoman soldiers. Vlad tells his wife to trust him before leaving his wife and son and going to meet the emissary and the soldiers alone. He is unarmed; but his son, afraid for him, runs to him, takes his hand, and tells his father that he is ready to join the Sultan's army. As Vlad approaches the Turks, the emissary, smiling, tells Vlad that he thought there would be some kind of difficulty. Vlad tells his son to run back to his mother, then takes the emissary's sword and kills him and his small entourage of soldiers.

Knowing his actions will lead to war, Vlad returns to the Broken Tooth Mountain cave to seek help from the vampire. Once he is inside, the vampire asks Vlad why he returned. Vlad replies, saying he needs the power of the vampire so that he can defeat the Ottoman army. The vampire tells him there are consequences and offers him some of his blood, which will temporarily give Vlad the powers of a vampire. If he resists the intense urge to drink human blood for three days, he will turn back into a human. Otherwise, he will remain a vampire forever and will one day be called upon to help his maker. Vlad accepts the offer and drinks the vampire's blood, going through a painful and deathlike experience as he transforms.

Waking up in the forest afterwards, Vlad discovers he has been granted heightened senses, inhuman strength and speed, and the ability to transform into a flock of bats; but his skin slowly burns in direct sunlight. When he returns to Castle Dracula, the Ottoman army attacks, but Vlad single-handedly kills them all. He then sends most of the castle's subjects to Cozia Monastery, which is situated on the edge of a mountain, as a better base for safety. During the journey, Mirena learns of Vlad's curse as she sees Vlad holding silver to keep himself weak when near his people to avoid revealing his condition to them or attack them for blood. After Vlad promises he will resist human blood, she accepts that he will regain his mortality once the Ottomans are defeated. A Romani named Shkelgim, who knows Vlad is a vampire, proclaims himself as his servant and offers his own blood; but Vlad resists. As they near the monastery, the Valahs are ambushed by Ottoman soldiers; and, while Vlad and his men successfully repel them, Vlad's sudden increased strength arouses suspicion among his subjects. The next day at the monastery, a monk learns of the curse and leads the Prince's subjects to turn on Vlad, trapping him in a burning building in the sunlight. Black smoke blocks out the sun, allowing an outraged Vlad to escape the fire, and he angrily reveals that he became a vampire for the sole purpose of protecting his people from the Ottoman suzerainty. Before he acts out against them, Mirena stops him and calms him down.

That night, the Ottoman army marches on the monastery. Vlad commands an enormous swarm of bats to repel them; however, the soldiers are actually a decoy force, allowing a handful of Turks to infiltrate the monastery, kill many of the inhabitants and kidnap Ingeras. Mirena tries to defend her son, and falls from the edge of the monastery wall. Dying, Mirena pleads with Vlad to drink her blood before the sun rises to give him the strength to save their son. Vlad reluctantly drinks her blood, triggering his final transformation into a full-blooded vampire and granting him even greater powers. Vlad returns to the monastery and turns a small group of survivors and mortally wounded into vampires as well. At the Ottoman army's camp, Mehmed prepares for a massive invasion of Europe. Vlad and his vampires arrive and easily massacre the terrified Ottoman soldiers, while Vlad himself goes after Mehmed, who is holding Ingeras captive. Aware that vampires are weakened by silver, Mehmed has lined the floor of his tent with silver coins, reducing Vlad's strength and speed, and impairing his vision, and fights Vlad with a silver sword. He overpowers Vlad and prepares to impale his heart with a wooden stake, but Vlad turns into a flock of bats and evades him. Taking the name "Dracula, Son of the Devil," he kills Mehmed with the stake and drinks his blood, fully succumbed to the savagery of his vampiric condition.

As they leave Mehmed's tent, Dracula and Ingeras are confronted by the other vampires, who demand that his son be killed because he is human. The monk who had previously led the Valahs against Vlad appears and keeps the vampires at bay with a Christian cross. When one of the vampires attempts to kill Ingeras, Dracula impales him with a spear as a warning to the others not to harm his son. Dracula orders the monk to take Ingeras away, then uses his power to clear the black clouds in the sky. The sunlight burns the vampires into dust, while Dracula collapses into a charred corpse. With Vlad presumed dead and Europe saved from the Ottoman invasion, Ingeras is crowned the new King of Wallachia. However, Shkelgim secretly takes Dracula into a nearby tent and revives him with his blood.

In the present day, Vlad meets a woman named Mina, who strikingly resembles Mirena, in the streets of a modern city (London), and they have a conversation about a line of poetry they have in common. The vampire who cursed Vlad, now healed, in a more human form, and still alive, watches them from afar and follows them, and anticipates what he has planned for Dracula in the future, saying, "Let the games begin".

This section is a stub. You can help expand this section by adding some information.