Gaius Caesar Augustus Germanicus, better known as Caligula, is an essential character of Dracula Untold. He is the first vampire to be recorded in history, perhaps the progenitor of the vampire race. Unlike other vampires, he had less of a human appearance, as his body was heavily aged, with all his teeth being fangs and his fingernails being sharp like claws. He was once mortal but made a Faustian deal with a demon (perhaps one of the demons of Lucifer/Satan) he had summoned from Hell. In exchange for his service and possibly his soul, the demon let Gaius drink its blood, becoming a vampire.

Gaius was betrayed by his sire and imprisoned in Broken Tooth Mountain where he remained for centuries; until the Middle Ages when he was freed by Vlad III Tepes.

Before becoming a vampire, Gaius Caesar Augustus Germanicus, or Caligula, was the Emperor of Rome between 37 and 41 AD. As an Emperor, Gaius earned his legacy as an insane tyrant from his reputation of cruelty, sadism, extravagance, and sexual perversity. Probably between his ascent to the throne and his supposed death at the hands of the Senate, Gaius summoned a demon from Hell to make a Faustian blood-pact in exchange for power and immortality becoming the first known vampire in history. The demon fulfilled it's part of the deal but later betrayed him and cursed Gaius to spend eternity in Broken Tooth Mountain, feeding on travelers to satiate his thirst for human blood. Presumably from the lack of regular victims to feed on, Gaius became more aged and monstrous in appearance, with all of his teeth becoming fangs and his fingernails becoming sharp like claws.

After centuries in which he is still locked in the peak of the broken tooth and having fed on the travelers who crept into his cave, in the late Middle Ages, Vlad III of Tepes, along with two men, went into his cave to explore and saw all the bones shattered, and Vlad believed that the Turks had never done such a thing, that there was a creature of the cave. Just then, Gaius brutally attacked the two men who accompanied Vlad, but the latter managed to wound him and when Gaius tried to attack Vlad again, the latter took his sword and pointed it at him, causing Gaius to stop, who seeing that his sword is made of silver, he retreated to the cave, allowing Vlad to escape.

Return of Vlad and Pact of Him[]

The next day, Gaius saw Vlad return, surprising him, since no one had ever returned to him and Vlad, seeing so many skeletons, saw that no one had ever had the privilege to leave; and Gaius said that even he will not have the courage to do so and enjoyed tormenting him with his superhuman speed, until he was finally face to face with him. Gaius, first, having removed his sword with a lazy wave of his hand, inspected Vlad, feeling his emotions, and realized that, while all the men who entered his cave emanated fear, Vlad felt hope. Gaius immediately told Vlad to hide the silver from his sight, as it wounds him, and asked why Vlad crawled to him in search of hope and the latter said that he came to him looking for help out of pure desperation, because the Turks threaten to destroy his kingdom and that by using a power like his he would be able to stop them, saving his people and his family, in the process.

Gaius admired his nobility of soul, describing who he was by his names, and that Dracula meant "Son of the Devil", but Vlad said that Dracula meant "Son of the Dragon", "Protector of the Innocents". Gaius asked him if his people knew how many innocents he killed and if they were hundreds, to which he said yes, but Gaius, seeing the lie in him, forced him to tell him the truth, threatening him to gut him from belly to head and forcing him to eating his intestines and grabbing him by the throat, pushing him to the wall. Vlad then said that there were thousands of people he killed and said that he felt nothing: no remorse, no horror, no power, which was a greater crime than the act itself and Gaius asked Vlad why he does not pay the blood just for the fun of it and the latter said that he does it because men do not fear the sword, but fear monsters and that they fled from them. Vlad mentioned that in the past he only impaled one village, saving ten to be feared and said, above all, that there are times when people don't need a hero, but need a monster, in times of desperation.

Gaius then answered him if he knows what it means to be a monster. Vlad did not reply, but Gaius, with a sharp fingernail, scratched Vlad's neck to lick his blood, as if he wanted to see his thoughts through it. Gaius replied that he may have no idea, but that he would soon understand. The latter told that for centuries the rotten walls of this cave were his refuge, because the demon who transformed him into this creature condemned him in it, deceiving and betraying him, in the process and that he had waited an eternity for a man to arrive. with his strength, his talents, an indomitable willpower and that he was a man worthy of darkness and its powers.

He also told him that if Gaius himself had been his salvation for Vlad, the latter would have been his; so he took a skull, broke it, and bites his own arm, letting out his blood to give to Vlad, asking him to drink it. He explained to him that his blood would give him the strength of 100 men, the speed of a shooting star, dominion over the night and all its creatures, he will see and hear with their senses and that he would be healed of serious injuries. Vlad asked him what the price was to pay and Gaius told him that, after he drank his blood, he will have a very voracious and insatiable thirst for blood, but he told him that, if he resisted for three days, he would once again be a mortal, having proved his power and saved his people, but if he succumbed to thirst, he would remain a vampire for eternity, telling him it would be better for him not to visit him, and he would be freed from the curse of the demon who held him prisoner, having finally offered the darkness a worthy replacement.

He also replied that he would become a paladin, like him, a scourge on earth destined to destroy everything he loves, such as lands, his people and his family and Vlad swore to him that he would die, rather than kill them, to which Gaius agrees and also said that he could have unleashed his wrath and rage against the one who betrayed him and that he would call him to serve him, making him his pawn in his immortal game of revenge, but Vlad said he was not a game for him; but Gaius said he couldn't help it and said there was no other way to endure eternity and that it would be the ultimate game: Light versus dark, hope versus despair and that the whole world hangs in the balance, waiting to decide the fate that awaits him. Vlad then said, drinking his blood, that he would have the pleasure of disappointing him immensely. The latter, feeling bad, said what was happening to him and Gaius, turning his back on him, said he was dying, the first step of the transformation into a Vampire.

Liberation from the curse[]

Gaius, for the rest of the film, is never seen, until Vlad's third and final day as a vampire and waited at the exit of the cave, hoping that Vlad would give in to his complete transformation into a vampire, which happened because Vlad, at the behest of Mirena, because she was dying and their son was kidnapped by Mehmed II, he bit the latter in the neck to drink her blood, thus completing his transformation into a vampire and breaking the curse that held Gaius prisoner, allowing this last to appear for the first time in centuries in the world and regain his human aspect.

Gaius, after surviving for many centuries and traveling the world, while in a London bar, saw in the distance Vlad talking and chatting with Mina Murray, the reincarnation of his beloved wife Mirena, and decided to take matters into his own hands with him and the pact they had made 5 centuries ago: that he would help him destroy the demon that condemned him to live in that cave for so many years.

Gaius is an old and immensely powerful elder vampire whose chief motivation is to seek vengeance on his traitorous sire for his imprisonment. He seems detached from the affairs of the mortal world, only concerned with his vengeance. However, having lived long enough to witness for himself both the best and worst of what humanity, the world and even life itself has to offer, the entity has no tolerance for being lied to by those he considers as literal lesser mortals, as seen by how he reacted when he sensed that Vlad was omitting from him some knowledge concerning the extent of the latter's kills before seeking the former in his own cave, pinning Vlad against one of the walls there and threatening to end him then and there if he lied to him again. But on the other hand, Gaius seems to acknowledge and even respect those who intentionally approach him with determination and courage, seeing how he did not immediately kill Vlad when Gaius deduced that he came to him for a reason and even took his time in listening to what the visitor has to say, and was almost sympathetic when Vlad reveals the lives he took without emotion felt, as he slew them, was a transgression far worse than the murders he committed. This all led to the vampire deeming Vlad as a worthy candidate to turn, but not before respecting him enough to give him options: to either become a being like his sire or to retain vampirism for a while and wait it out until Vlad regains his humanity, or not at all.

Gaius before being freed from his curse. 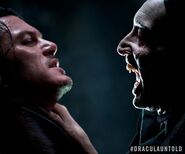