Lady Jayne Wetherby was a fashion-forward character who was instantly attracted to Dracula. She was also a member of the Order of the Dragon, the organisation responsible for killing Dracula's wife and turning him into a vampire centuries ago. Her mission is to track and kill the vampire which the Order knows to be stalking London's streets, but her newly developed sexual relationship with Dracula might put her loyalties into question, especially as she has been warned by the Order that assisting their enemies will result in punishment (implied to be death).

Jayne appears to be an extremely wilful and independent woman, by the standards of the Victorian society in which she lives. As a member of the Order of the Dragon, she possesses considerable wealth and privilege, and appears to be skilled in manipulating and influencing others. She has also shown a certain inclination towards decadence, particularly where her sexuality was concerned. Jayne Wetherby has demonstrated considerable combat aptitude - her preferred weapons being a pair of kukri knives - and an absolute lack of fear of vampires (even keeping a caged vampire close by while training).

Despite all her skills and the holy weapons supplied to her by the Order of the Dragon, however, she ultimately proved to be a little match for Dracula when they eventually fought one-on-one. Even though the elder vampire had been injured by an explosion, he was still able to easily disarm and overpower her, before draining her blood. In respect of her last wishes, he allowed her to simply die rather than turning her into a vampire.

Jayne was fashionable, fashion-forward, extremely wilful, independent, and manipulative; she was able to manipulate and influencing others. She has also shown a certain inclination towards decadence, particularly where her sexuality was concerned. Jayne was also cruel, ruthless, as well as arrogant and overconfident; with having absolute lack of fear of vampires.

Jayne was in a sexual relationship with Alexander Grayson, she became attracted to him, unaware that Alexander is Dracula, the king of vampires. She even showed jealousy when it was revealed that he truly loved Mina and not her. When she discovered who Alexander really was, she no longer had any attraction towards him and they engaged in a battle resulting in Dracula killing her.

At many places (Mina and Jonathan's engagement party, the Savoy) which Jayne and Lucy both attended, Jayne noticed that Lucy had an eye out for Mina, later inviting her to have tea with her, telling her how it was "common to have these urges" (to like other women) and she later kissed Lucy. Afterwards, she persuaded/manipulated Lucy to sleep with her best friends' fianceé. 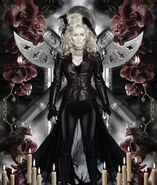