Jonathan Harker is a fictional character and one of the main protagonists of Bram Stoker's 1897 Gothic horror novel Dracula. His journey to Transylvania and encounter with the vampire Count Dracula and his Brides at Castle Dracula constitutes the dramatic opening scenes in the novel and in many of the film adaptations.

Harker was a recently certified soliciter from Exeter, who is sent by his employer, Mr. Hawkins, to Transylvania in order to consult a on a property transaction. This client is a mysterious count who lives in a castle in the Carpathian Mountains and is planning to move to England where he plans to reside at (among other locations) Carfax Abbey. Soon after Harker's arrival at the castle, he is made a prisoner by this Dracula, who is revealed as a vampire. Harker also has a dangerous encounter with the seductive brides of Dracula, and if he weren't saved by Dracula, probably would have ended up a vampire himself.

Later, he manages to escape, finding refuge at a convent. He has a mental breakdown upon arriving at the convent because of his experiences with Dracula and the brides; his fiancée, Mina Murray, comes to nurse him back to health with the nuns' help and marries him there. He returns home to England and later sees Dracula in London. After learning Dracula killed Lucy Westenra, he joins Abraham Van Helsing, John Seward, Arthur Holmwood, and Quincey Morris. His clerical skills prove very useful for collecting information and for tracking down Dracula's London lairs by means of paperwork. He vows to destroy Dracula and, if he could, to send "his soul forever and ever to burning to hell!" even if it be at the cost of own soul. When confronted with Mina's curse, however, he is unsure how to react; Mina asks the others in the group to kill her if the need comes. While Harker says he would, in the privacy of his journal says that if it is necessary, that he would become a vampire himself out of his love for her. However, Harker manages to avoid that because along with Van Helsing and the others he manages to destroy Dracula. At the book's climax, he pries open Dracula's coffin mere moments before sunset and slashes open Dracula's throat with a kukri knife while Quincey Morris stabs him in the heart with a Bowie knife.

He and Mina have a son whom they name Quincey, after Quincey Morris. Quincey Harker's birthday is the day Quincey Morris died fighting Dracula, Mina likes to think that some of Morris spirit is in their son. Jonathan Harker eventually visits Dracula's castle along with his wife and son and their surviving friends to reminisce. He returns home with his wife and son and is told by Van Helsing that one day his son will learn the whole story.

One interesting thing to note is Harker's religious orientation. While he, along with all the other main characters, is a Christian determined to serve Jesus by destroying the demonic Dracula, he, unlike the devout Van Helsing, is not a Catholic. Early in the book, he describes himself as an "English Churchman", that is to say a member of the state-sponsored Church of England, an Anglican. He is at first suspicious when an old woman gives him her own crucifix when he says he is going to go to Castle Dracula. (With how "beads" are mentioned, it may in fact be a rosary.) Privately thinking that such things are idolatrous, he is apparently a low church Anglican. Yet when he is trapped in Castle Dracula and is protected by the cross' power his allegiance shifts.

Bram Stoker appropriated the surname Harker from his friend Joseph Cunningham Harker (1855-1920), a set designer at the Lyceum Theatre[1] and father of actor William Gordon Harker (1885-1967) as well as great-grandfather of actress Polly Adams, whose actress-daughters Susannah Harker and Caroline Harker adopted the Harker surname for their stage names. 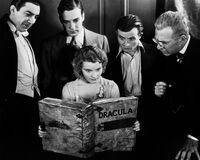