Mina Murray is the deuteragonist of the tv series, Dracula.

Mina is a striking brunette medical student with a whip who is incredibly forward thinking and independent for a woman of her era, being the only woman training at the University of London.

Mina is the daughter of William Murray and the late Mrs. Murray, the ex-fiancée of Jonathan Harker, the ex-best friend of Lucy Westenra and the girlfriend of Vlad III. She is also the reincarnation of Vlad's long dead wife, Ilona.

In "The Blood Is the Life",

Mina and Jonathan are a couple at the start of the first season and become engaged by the second episode. The seem to be the perfect couple but Jonathan desires more than anything to climb the social ladder, and eventually becomes an employee of Grayson. This brings him into Grayson's supernatural world that also includes the Order of the Dragon.

In "The Devil's Waltz", Jonathan sees the connection Grayson and Mina have and wants to keep them apart. Jonathan eventually becomes a member of the Order of the Dragon.

In "Four Roses" and "Come to Die", Jonathan and Lucy have sex and Mina is told by Lucy. Mina calls him a "pig", and storms out ending their engagement.

In "Let There Be Light", Jonathan tampers with Grayson's energy machine during a publicity event. The machine is set to explode, killing dozens of people supposedly including Grayson. Mina screams that Jonathan is a murderer, of dozens of innocent people and Grayson himself. At the end of season 1; it is implied that their relationship is damaged beyond repair.

Mina and Lucy enjoy each others company, Mina's friendship with Lucy becomes strained, after she finds out that not only that Lucy is a lesbian, but she is also in love with her as well.

However, Mina and Lucy's friendship becomes damaged beyond repair; after she finds out that Lucy had slept with her then-fiancé, Jonathan Harker.

In "The Blood Is the Life", Mina first met Vlad (under the persona of Alexander Grayson) at his mandingo party, when she saw him for the first time, Mina immediately became romantically attracted to Vlad and she has a strange feeling that she met him somewhere before; this is due to her memories as Ilona.

As the series progresses, Vlad and Mina become more attracted to each other with Mina falling in love with him.

In "Let There Be Light", Mina and Vlad share their first kiss and make love. They most definitely would have enter an romantic relationship at the beginning of season 2 if the series had continue for a second season. 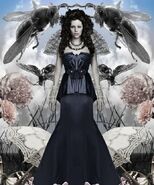